If you take a closer look at your dog at bedtime, you will notice that he adopts a wide variety of positions. From the classic curled up in a ball to the belly up, and even putting his paws in positions that seem impossible.
Why do dogs sleep with their eyes open? Below, we explain why this happens, if we have to worry about it, or what to do about it. Is it normal for dogs to sleep with eyes open?

Dogs' eyes are a very sensitive part of their anatomy. They are exposed to the action of the elements as well as being susceptible to pathologies in any of their components, such as the retina, the cornea, or the crystalline lens. Fortunately, it is easy to discover these types of alterations, as they will be perfectly visible.
Ocular discharge, redness, prolapse, itching, hair loss around the eye, color changes, or pain are some of the signs that should alert us and make us go to the vet. If our dog sleeps with one or both eyes open, the first thing to do is to check his condition. Any sign such as those mentioned above is a reason for consultation.

Do all dogs sleep with their eyes open?

Sometimes, even quite often, dogs do not just open their eyes while sleeping. They appear to be peacefully asleep until, suddenly, they start moving frantically and it is at that moment that they open their eyes, although, to our surprise, they are still asleep. This is a completely normal phase of their sleep.

Dogs sleep in a similar way to humans. They divide their rest into a longer and shallower sleep phase and another, brief one, in which the well-known REM phase takes place. It is in this phase that perfectly identifiable movements appear, such as the following:


These signs, which do not all have to occur, last only a few minutes. Then the dog continues sleeping peacefully, to our astonishment, or wakes up, sometimes frightened. Even if we are also startled, we should not wake him up or do anything but talk to him calmly if he wakes up on his own.

The way the dog sleeps

In addition to the movements associated with the REM phase, it is important to know that dogs tend to remain in a light sleep throughout the day. In other words, it would be what we know as "sleeping with one eye open and one eye closed". They appear to be asleep, but, if you look closely, they are in a fairly alert body posture.

At this time they may not close their eyes completely, but they are not truly asleep. They are just resting, as in wakefulness. If they hear the slightest noise in this state, they will not hesitate to get up quickly to find out what is going on.

So far we have seen circumstances that fall within normality, that is, they are not pathological, which can explain why our dog sleeps with his eyes half open. But there are cases in which behind this opening there is a pathology. In fact, it is a problem that has its own name: lagophthalmos.

Thus, our dog can keep his eyes open not only while sleeping. If we discover that he never manages to close his eyelids completely, we are faced with an inability, which is lagophthalmos. There are several causes that can lead to this problem, which is always a reason to visit the veterinarian. And as soon as possible.

It is more common in dogs with prominent eyes, such as brachycephalic dogs, that is, breeds like the Pug, Bulldog or the Boston Terrier. The problem is that keeping the eye uncovered, even a small part of it, contributes to corneal desiccation or ulceration. In these cases, surgery is usually necessary to avoid potential damage to the eye.

Facial paralysis can also lead to sleeping with the eye open.

In addition, facial paralysis affecting the eyelids may also result in incomplete closure of the eyelids. Normally this type of pathology would only show in one eye. It can be noticed that the dog does not blink even if we bring a finger close to the eye. There are several causes of paralysis, such as tumors, middle or internal otitis media or trauma.

The complications for the eye would be the same as in the previous case, i.e. dryness, even if there is no problem in the production of tears, and ulcers, which can become large. To solve these cases, a temporary surgical solution may be chosen until the cause is diagnosed and resolved. 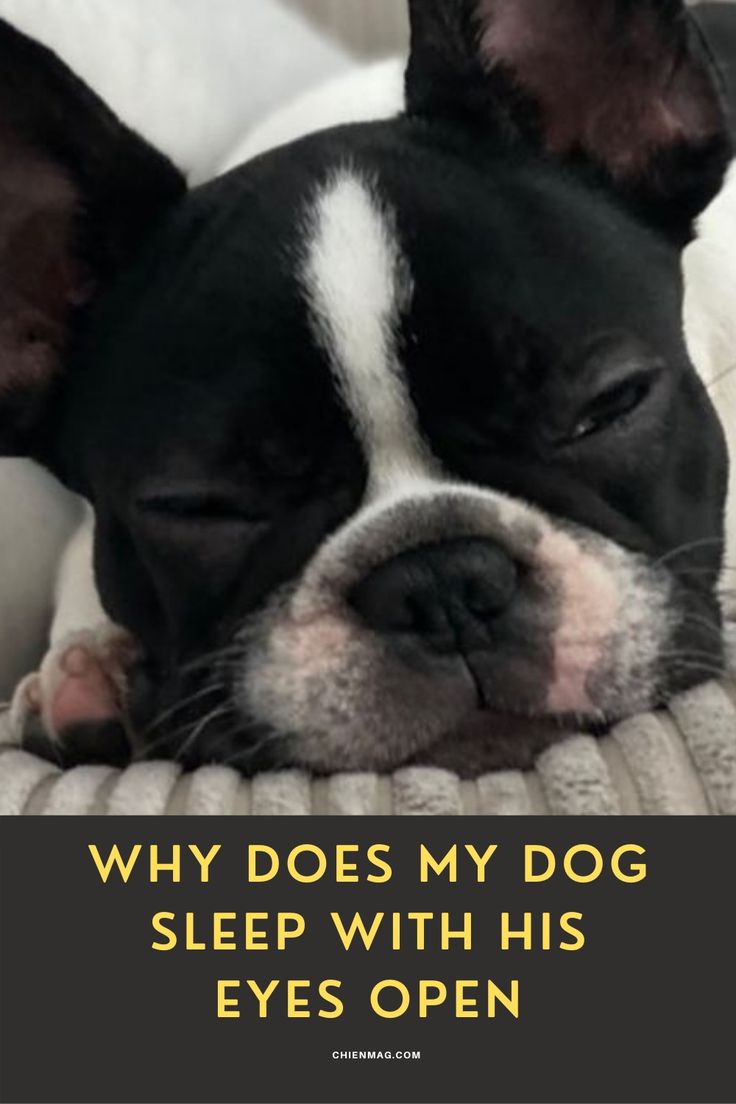