Watching a sleeping dog can be quite amusing. Some sleep with their eyes slightly open or snore.

Others twist themselves into such strange knots that our backs hurt just looking at them.

But that's not all a dog can do while sleeping. Barking is also part of its repertoire.

Only, why is that so? Does a dog not have enough time to bark when awake?

In this article, I'll tell you what barking while sleeping is all about and whether you need to do something about it. You will also learn exciting information about sleep and dreaming in dogs. 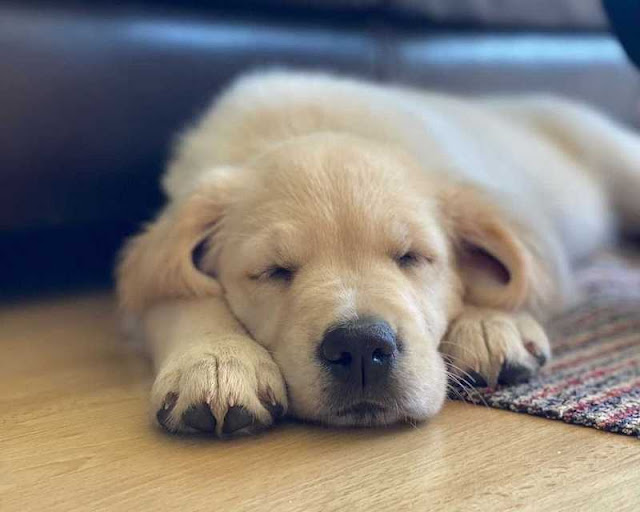 My dog barks in his sleep - is it normal?

Yes, it is completely normal. A dog barks, and he can't stop barking even when he is asleep. It is as much a part of his nature as talking is of ours.

Well, why does a dog bark in his sleep? Why do some people talk in their sleep, suddenly sit up or even sleepwalk?

Probably your dog is simply dreaming and barking in the dream. Sometimes such a dream is so intense that he actually barks.

Do I have to do something about it?

No, you don't. That would not work at all. Your dog is not intentionally barking in his sleep.

He can't help it. It wouldn't work if you punished him for it.

A dog that barks in his sleep is like a person who talks in his sleep. After all, we don't even realize when we dream and turn something from the dream into reality.

I know a man who is a real joker when he is awake. Even in his sleep he regularly laughs so loud that his wife wakes up next to him.

Unfortunately, she never gets to hear the joke and the next morning he knows nothing about it.

Perhaps you have also dreamed that you are under water and reflexively held your breath? Of course, that was not necessary.

Or you suddenly hit something in your sleep, sat down or even sleepwalked?

All this can happen to dogs just like to us humans. And like us, there is nothing he can do about it.

Dogs go through different sleep phases just like we do.

In the beginning, they are in a light sleep, from which they can quickly wake up.

This is followed by a deep sleep phase where they are sound asleep. Deep sleep is important. During this time, your dog connects what he has learned and recovers.

After deep sleep, your dog enters the REM cycle. In this phase he dreams the most.

The sleep cycles are shorter in dogs than in humans.

On average, a dog goes through a sleep cycle of light, deep and REM sleep every 16 minutes.

Significantly shorter than the 90-minute sleep cycle in humans. This is important because dogs still haven't fully acclimated to the safe home we provide them.

They need to stay alert even when asleep. A longer period of deep sleep would be dangerous for them. After all, if they weren't lying in their baskets next to the fireplace....

For this reason, a sleep cycle is usually followed by a short awake phase of about five minutes. During these waking minutes, your dog quickly scans his surroundings.

If everything is safe, he goes back to sleep. He does not necessarily get up for this. Often a short opening of the eyes is enough or he listens more closely.

By the way, we also wake up more often at night to make sure everything is okay. However, we seldom remember it because these waking phases are so short.

Your dog will feel the same way. 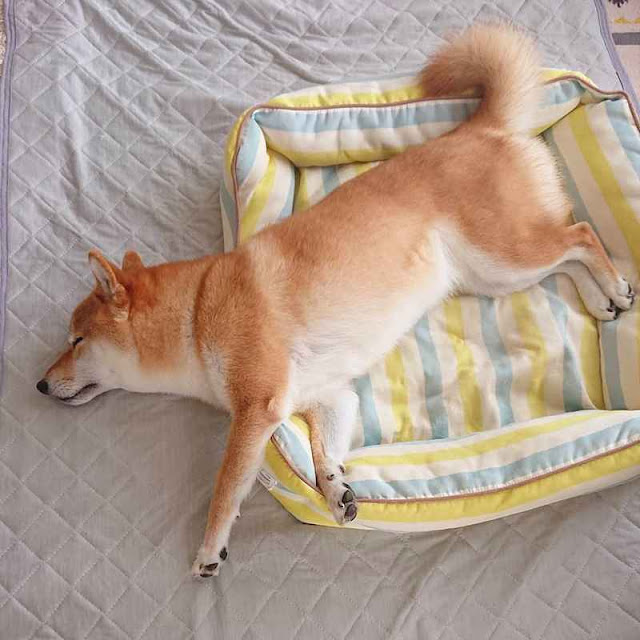 Lack of sleep and its consequences

Dogs need about 14 hours of sleep per day.

They divide these hours among several naps. If your dog is already older or rather quiet by nature, he can also sleep or rest significantly more.

Like all animals, dogs need adequate sleep. They need to recover and process experiences.

Puppies in particular learn and grow while they sleep. For these reasons alone, their sleep requirements are higher than those of adult animals.

Sleep deprivation can lead to serious illnesses. Initially, however, dogs that sleep too little become hyper and more active.

Parents certainly know this behavior from their toddlers, who run wild through their room when their nap is over.

If the lack of sleep lasts longer, concentration suffers. What normally doesn't cause your dog any problems, then poses a serious challenge for him.

After that, his behavior changes. The lack of sleep leads to aggressiveness and irritability.

Since the immune system cannot work properly under sleep deprivation, a dog now gets sick more easily. Even cancer could be related to lack of sleep and stress.

So, in summary, sleep deprivation in dogs leads to:

Sufficient sleep, whether barking or not, is also important for the health of dogs.

So make sure your dog gets enough rest during the day and of course at night.

The right sleeping place and the sleeping position

To get enough sleep, a quiet place to sleep is absolutely necessary.

The basket or blanket should therefore not be in the middle of the room. If your dog has to fear that he will be overlooked and accidentally kicked, he will certainly not sleep as relaxed as he could.

Also, when choosing a room, you should consider how often and how many people go in and out of it. There shouldn't be constant traffic, but your dog shouldn't feel like he's alone either.

The basket or blanket should be large enough for your dog to stretch out if he wants to. Most dogs curl up when they sleep.

As an owner, you get the feeling that even three dogs would have room in this basket. But every now and then they stretch their legs.

They should always have this opportunity.

Whether a dog sleeps cuddled up or rather stretched out, also depends on the room temperature. If it is rather cool, dogs curl up.

In midsummer, they tend to lie around, stretched out on all fours. Preferably, of course, on the cool tiles.

Of course, no one can say for sure, because we can't ask our dogs about it.

But there is a lot to say that dogs are capable of very vivid dreams.

You can easily recognize the REM cycle: Your dog twitches with his paws, moves his eyes, wags his tail or makes sounds.

Since REM sleep is less deep, he may carry some actions performed in the dream into reality.

Michel Jouvet, a French sleep researcher, conducted experiments on cats in 1960 in which he abolished the muscle paralysis that actually exists during sleep.

This muscle paralysis serves for our protection, because otherwise we would carry out everything we experience in the dream.

Thus it came also to the following result: The cats did not twitch any longer only, but ran around in such a way, as if they were awake (source).

It is obvious that the cats were dreaming intensively and behaved accordingly. So when your dog twitches or barks, this muscle paralysis keeps him from sleepwalking properly.

What do dogs dream about?

Again, we don't know for sure. But it is likely that dogs process experiences in dreams.

It is the same with humans. Even if occasionally very strange scenarios come out with it...

Probably your dog is dreaming about the hilarious ball game you had with him.

Or of the delicious Sunday roast, from which he got something, hidden under the table.

Also his dog buddies, special events or just, as with us, sometimes simply nonsense, will pursue your dog into his dreams.

So if your dog had a very exciting day, he will probably dream more intensely, which could lead to barking in his sleep.

A trip to the beach, a meeting with his best friends or even negative experiences (New Year's Eve, a visit to the vet) dogs often have to deal with in dreams.

In this video you can see a Dalmatian who is dreaming. He is twitching his legs and barking. However, he quickly calms down at the end of the video.

Should you wake up a dog that is barking in his sleep?

That's not so easy to answer yes or no.

Basically, of course, you should not wake sleeping dogs. After all, they are recovering.

You certainly don't like to be woken up when you are not yet asleep either. Most likely, your dog will wake himself up by barking or twitching his muscles more.

It's also quite possible that he will calm down quickly enough and just go back to sleep.

Read also: How To Train a Dog To Not Bark at Night

Dogs tend to bark quietly in their sleep

Prolonged barking during sleep does not really occur. Most of the time, our dogs only make muffled sounds.

They don't even open their mouths properly, but rather exhale loudly. It is extremely unlikely that anyone will feel disturbed by this.

So you don't have to worry that barking in your sleep could lead to a neighbor dispute.

Also keep in mind that you don't know what your dog is dreaming about. Maybe he's chasing the rabbit he saw in the field the day before?

And he is so close to catching it! We know how unsatisfying it is for us when the alarm clock rings just when our dream is getting really exciting.

Your dog will feel the same way.

can dogs have nightmares?

Dogs can also have nightmares. If you save them from them, they will not be angry with you. However, we also often find it difficult to perfectly separate dream and reality right after waking up.

That is, if your dog feels threatened in the dream and you suddenly touch him, he might get scared. He may even snap at you.

He does not do this with malicious intent. He simply can't tell yet whether you're petting him or the nasty neighbor's dog from his dream is attacking him.

It is best to talk to him calmly and touch him slowly and carefully. If your dog wakes up, stay with him for a moment until he collects himself.

Or wait until he wakes up on his own and then calm him down. This way you play it safe and still don't leave your dog alone with his nightmare.

By the way: If your dog often dreams intensively, twitches or barks, it means that he feels very comfortable with you.

A dog that feels safe also sleeps more relaxed. A dog that can rely on its owners and home is better able to indulge in its dreams.

So the next time your dog barks in his sleep, just take it as a compliment.

Also dogs dream and process thereby experienced. If it concerns intensive dreams, they can twitch thereby already times with the legs.

Also howling and barking is not unusual.

As a rule, it is not necessary to wake your dog for this reason. Barking during sleep is usually short-lived.

Besides, this would not change his behavior. He might bark again in the next dream. Your dog can't control that.

I have a feeling that my dog is having a nightmare and that is why he is barking. Can I wake him up?

If you trust your dog, you can. However, your dog might have trouble telling dream from reality and snap at you.

Are there breed differences when it comes to barking in his sleep?

Small dog breeds dream more than large ones. So it may well be that a small dog barks more often in his sleep. 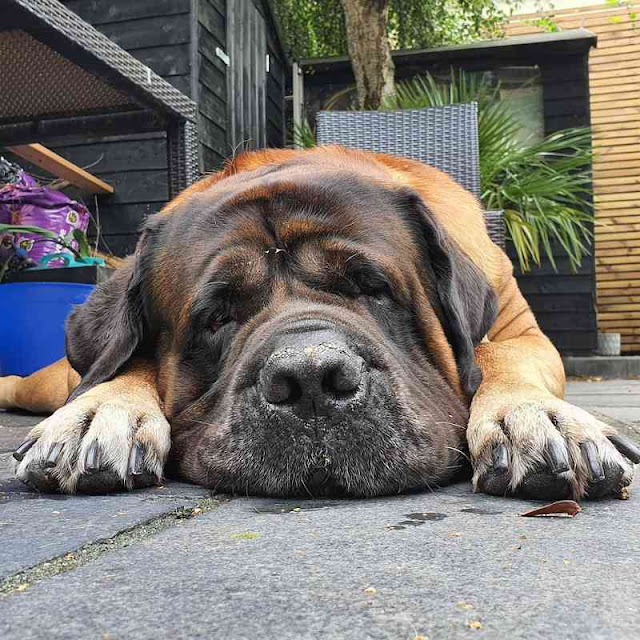 Can I break my dog's habit of barking in his sleep?

No, you can't, because your dog can't control this behavior. However, very exciting or stressful events can lead to more intense dreams that encourage barking.