Why Is My Dog Licking His Paws?

If your dog licks his paws, he probably does it often, but you don't know why he does this curious behavior. And the truth is, sometimes it's hard to understand why animals do certain things. There are many reasons why a dog may lick its paws, let's see them! 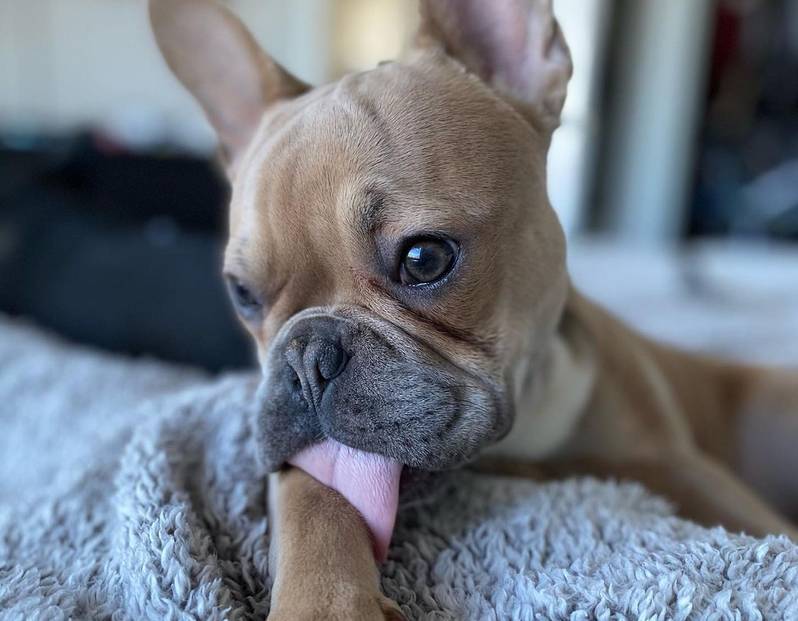 Why is my dog licking his paws? It could be allergies

Allergy is one of the most common reasons why a dog licks its paws. He may not have any symptoms on his body and the itching and discomfort may be concentrated only on his paws. To relieve the discomfort, your dog licks his paws a lot or even bites them, which can lead to injuries.

If you see him or her doing this often, don't ignore it. It's probably a sign that something is wrong.

What allergies can he have? Allergies can be of all kinds, from those caused by the environment (rubbing against ears of corn, pollen...), to a reaction to a bad diet, to medications or to allergies caused by soaps or fabrics.

If your dog licks his paws a lot, check to see if it's an allergic flare-up: if it is, you'll see redness, flakes, rashes or even sores if he's been scratching for a long time. If this is the case, go to the vet and he will prescribe a corticosteroid ointment to treat it.

Why does my dog lick his paws a lot? Lack of hygiene

If your dog licks his paws a lot and you have ruled out allergic reactions, pay attention to his hygiene. Is he clean, does he have weeds or thorns on his paws, is his hair matted? Something may be bothering him.

Or maybe, even if he's not too dirty and doesn't need a bath yet, your dog just wants a little grooming.

Remember to always take care of your pet's hygiene and health!

Read also: Why does my dog pee on my bed?

If your dog licks his paws a lot, he may have wounds

Another reason dogs lick their paws is to relieve discomfort caused by injuries. They may have injured themselves while walking or playing, such as by cutting or scratching themselves.

They may also have something stuck or snagged in their pads that bothers them when they walk and they lick themselves to try to get it off. For example, twigs, sticks or splinters.

Check its paws and feet for injuries!

Licking their paws gives them vitamins!

Yes, as strange as it sounds, dogs can get vitamins from licking their paws. As you may know, for humans the sun is a perfect ally to metabolize the vitamin D we consume; however, dogs are not that lucky, they do it differently. Vitamin D in dogs remains in the top layer of the skin, the layer of fat that contains their coat. Their body is not able to absorb it on its own, so they lick it off to get it into their system.

If your dog licks his paws a lot, but has no wounds, allergies or discomfort... he may be bingeing on vitamins!

May lick its paws out of boredom and anxiety

Dogs need daily exercise, play and to keep their minds distracted. If they don't nerves and boredom will take over and they may develop destructive behaviors. These behaviors can affect your home furnishings, their toys or may cause them to compulsively lick their paws.

It can also be a reflection of anxiety, such as separation anxiety.

The bite of certain parasites, such as fleas and ticks, can cause great discomfort to your pet, who will instinctively lick his paws (if that is where he was bitten) to relieve himself. If your dog is allergic to these parasites, the situation will be even worse for him and he will lick his paws even more!

The presence of fungus can also cause this attitude. So make sure your pet is always clean and dewormed!