Many guardians consider halitosis in dogs to be natural. That is, they see it as normal that the dog's mouth smells bad. This is far from the truth. We cannot expect the dog to have mentholated breath, but it should be rather neutral. If a dog has halitosis, there is an underlying problem that is causing it. 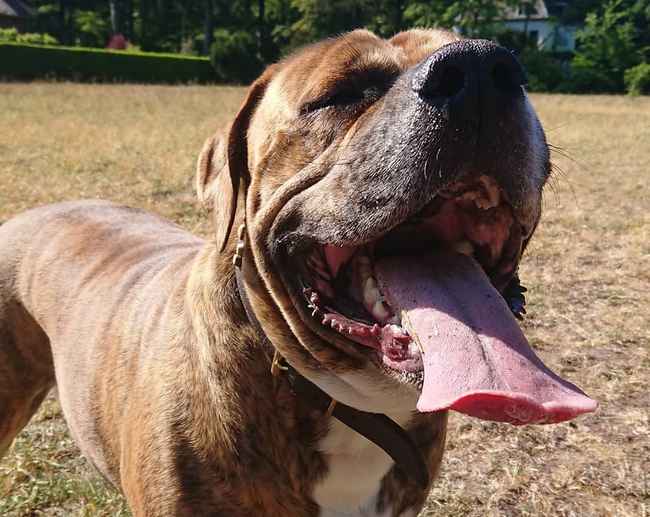 The vast majority of conditions that cause halitosis in dogs are dangerous and can slowly deteriorate the animal's health until, when other symptoms become apparent, it may already be too late for further treatment.

If your dog has a bad smell in his mouth, go to a professional for a dental inspection. It is essential to find the cause of halitosis in dogs.

1. Tartar buildup and halitosis in dogs


Tartar is a bacterial plaque that is attached to the tooth by mineral deposits. In addition to causing strong halitosis if tartar build-up is significant, it can also damage adjacent tissues, such as the gums. This causes gingivitis and subsequent infections that will increase the bad smell in the dog's mouth.

On the other hand, due to its mineral nature, tartar can affect other organs such as the heart, kidneys or lungs. In this way, it can cause heart disease, kidney stones, etc.

What you can do against tartar


Oral neoplasms are relatively common in dogs, where they tend to be benign, unlike cats, which more often develop malignant tumors. These tumors can appear anywhere in the mouth such as the lips, the hard or soft palate, the gums... Occasionally, a malignant carcinoma develops.

Depending on the nature of the tumor, the dog will experience either mild discomfort or a severe stomatitis - inflammation of the oral mucosa - with halitosis. Also, because of the pain, he may stop eating and suffer from anorexia.


Candidiasis is a fungal disease - caused by fungi - that affects mammals, including humans, in addition to birds. This disease is caused, specifically, by the yeast Candida albicans.

When it infects a dog's mouth, it can cause various symptoms such as:


As it is a fungal disease, it carries a very specific treatment, which must always be prescribed by a veterinarian. In addition, to determine that it is this fungus that has infected the dog's mouth, concrete tests are necessary.


One of the most serious and common diseases that can suffer the mouth and also cause halitosis in dogs is periodontal disease. This disease begins with an accumulation of tartar on the teeth that ends up causing gingivitis or inflammation of the gums. This phase of the disease is totally reversible with the proper treatment and therapy.

However, soon after, periodontitis appears. At this stage, the dog will have severe pain and generalised infections in the mouth. He may therefore stop eating. He will begin to lose gum tissue and therefore teeth, which may not fall out because they are held in place by the deposited tartar.


Chronic kidney disease is defined as the presence of functional or structural abnormalities in one or both kidneys that have been present for at least three months or more. This serious life-threatening condition is accompanied by several symptoms:


On the other hand, dogs suffering from this disease often also develop heart problems. In many cases, these problems derive from an incorrect oral health, so it is very important to take care of our dogs' mouths.
health
Next Post Previous Post
No Comment
Add Comment
comment url
bad breath,dogs,halitosis,health