10 Interesting Facts About the German Shepherd

John
Friday, March 13, 2020
Facebook Twitter
German Shepherds are dogs that never go unnoticed, whether by their noble appearance, attentive expressions or balanced behavior. So many attributes explain why we usually see so many dogs of this breed around the world, which continues to gather admirers of all cultures, ages and styles. 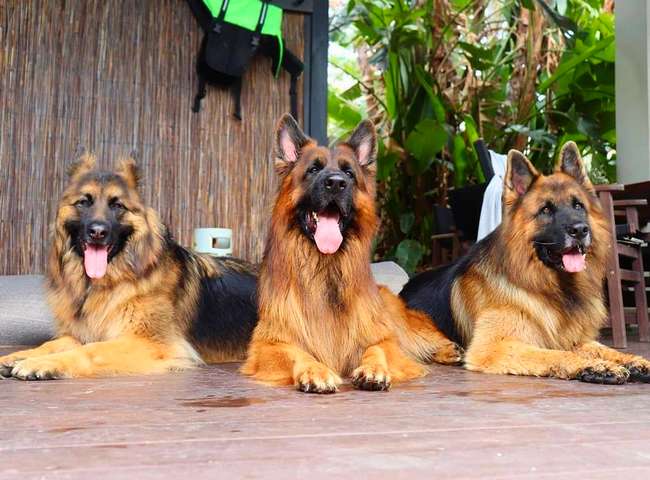 1. The breed was developed for grazing


Nowadays, the German Shepherd is usually associated with a police dog, a rescue dog, a guide dog or an excellent guardian of his home and protector of his family. However, as the name suggests, this breed was developed to graze flocks, especially sheep, in the fields in Germany.

Its origins as a sheepdog date back to the late 19th century, when Cavalry Captain Max Emil Frederick von Stephanitz devoted himself to creating a breed for fieldwork that also had a noble appearance. Thanks to its great intelligence and predisposition to dressage, the German Shepherd Dog has become one of the most versatile, developing with excellence a wide range of tasks, tricks, sports, services and various activities.

2. They are extraordinarily intelligent and loyal


The versatility shown by the German Shepherd in all the functions he is capable of performing is not a coincidence, but stems from his privileged cognitive, physical and emotional abilities.

The German Shepherd is the third most intelligent dog in the world, after the Border Collie and the Poodle. Moreover, their alert, well-balanced, secure and extremely loyal character towards their guardians facilitates their training and makes them "all-rounders".

Logically, in order to achieve optimal development of their physical and mental attributes, we must provide them with adequate preventive medicine, as well as educate the German Shepherd correctly and not neglect their socialization, physical activity or mental stimulation.

3. They are one of the most popular dog breeds in the world.


The German Shepherd has been one of the most popular and beloved dogs in the world for many years. This is probably due to his "perfect combo", which combines a noble appearance, remarkable intelligence, great sensitivity and a reliable, obedient temperament.

In their family nucleus, they are extraordinarily loyal to their guardians and would not hesitate to defend their family thanks to their enormous courage. When they are properly educated and socialized, they can get along very well with children, showing a very loving and protective character, as well as living in peace with other animals if they are well socialized.

4. The German Shepherd is a film and television hit.


The dog Rin Tin Tin, the protagonist of "The Adventures of Rin Tin Tin", was most probably the most famous German shepherd in the artistic world. The most successful format of this fiction was released in 1954 as a television series in the United States.

But the character had already appeared in several silent films of the 1920s. The character's success was such that Rin Tin Tin had his fingerprints recorded on the famous Hollywood Walk of Fame.

In addition, the German Shepherd was also involved in many other productions for film and television, such as "Super K9 agent", "I am a legend", "The Nuclear Name" or "Commissioner Rex" among many others. Logically, several dogs of this breed participated in the recordings to give life to the characters.

5. They participated in both world wars


The German shepherd is one of the few breeds that accompanied the German army in the two world wars in which the country participated. When the First World War broke out, the breed was still relatively young and the German authorities were not so sure of its performance in that context.

During the hard years of the war, shepherds helped carry messages, locate wounded soldiers and patrol alongside officers, always being alert to the presence of enemies. Their performance was so amazing that even the Allied soldiers returned home with great admiration and fanciful stories about the abilities of the German shepherds. As a result, the breed became known outside of Germany and gained popularity in other countries.

Already during World War II, the German shepherd was a famous breed in Europe and the United States, but its skills again impressed the soldiers who served with it on the front lines.

6. They can become very greedy


Despite its balanced behavior, the German Shepherd can become a bit gluttonous, by eating too much or too fast. As caretakers, we need to be aware of these bad eating habits, both to prevent them and to deal with them quickly.

Ideally, we should divide the daily amount of food into at least two meals, so that he does not go without food for so many hours. Logically, you should ensure that you provide him with a complete and balanced diet that fully meets his nutritional needs and is appropriate for his weight, height and age. In addition to providing a routine of physical exercise and mental stimulation to maintain a healthy weight and balanced behavior.

If you are already following these guidelines and your dog continues to be greedy, we recommend that you take him to the vet to check that his diet is adequate for his nutritional needs, as well as to rule out the presence of intestinal parasites or any disease. We also invite you to read our advice on what to do if your dog eats too quickly.

7. They are strong dogs, but their health is not made of iron.


Despite being a strong and resilient dog, the German Shepherd Dog has a genetic predisposition to many degenerative diseases. The enormous popularity of the breed and the search for standardization of its physical characteristics have led to blind crossbreeding which, to this day, is reflected in the health of the German Shepherd.

The most sensitive area of their body is undoubtedly the abdomen and extremities, since the German Shepherd is one of the breeds of dogs most likely to develop hip and elbow dysplasia. However, there are also other common illnesses in the German Shepherd Dog, such as


8. His coat has been the subject of much controversy.


The type of coat accepted for this breed has been the subject of much controversy since its recognition by dog societies. The reality is that there are three varieties: short and hard hair, long and hard hair and long hair. However, the official breed standard only defines as correct the double coat with undercoat.

The outer coat should be hard, straight and as dense as possible, while the length of the coat may vary according to the regions of the dog's body. Similarly, the German Shepherd Dog is not recognized as a long-haired dog.

It should also be noted that different colors are allowed for the coat of the German Shepherd Dog. In addition to the traditional solid black or black and tan, German Shepherds are also found in different shades of grey and even yellowish. However, white dogs are not included in the official breed standard.

Last but not least, it is important to remember that the German Shepherd's beautiful coat requires daily brushing to remove dirt and dead hairs, as well as to prevent lumps or knots from forming in the coat.

9. They are not aggressive dogs by nature.


The German Shepherd is one of the most reliable dogs of all known breeds. They are not aggressive and even less bad by nature, on the contrary, they tend to have a balanced, obedient and alert behavior. However, as we always point out, a dog's behavior will largely depend on the education and environment offered by its guardians.

Unfortunately, incorrect or irresponsible handling by some owners can lead to undesirable situations involving their dogs. This is why it is essential to pay special attention to the training and socialization of our best friends, regardless of their breed, age or gender.

Logically, the ideal situation is for us to start training him as soon as he arrives with us, but it is also possible to train and socialise an adult dog successfully, always using positive reinforcement to encourage his learning.

10. He was the first guide dog in the history of the world to be trained as a guide dog.


The world's first guide dog school, called "The Seeing Eye", was established in the United States and its co-founder, Morris Frank, traveled between his home country and Canada to promote the usefulness of these trained dogs. Thus, the first dogs trained to help the blind were four German Shepherds: Judy, Meta, Folly and Flash. They were given to First World War veterans on October 6, 1931, in Merseyside.